Home Political Action Looking Ahead After the Election

First, we thank those who helped out on Question 2. You were amazing. You were everywhere. From lawn signs to bumper stickers to buttons — thank you. To those who canvassed, made phone calls, sent postcards, or stood at a rotary — thank you. To our membership which generously donated $300,000 to the Save Our Public Schools Committee to help out on the last-minute push — thank you.

We also thank the leadership in our schools and at Bayside, and in particular our organizing unit, Shanika Holder, Jonathan Rodriquez, and Director Jessica Tang, for going above and beyond 24/7.

We are allowed to rejoice — for a short minute — but as we do so, we need to prepare. President-elect Trump has a few things in mind for our schools, and Governor Baker is not taking his Yes-on-2 defeat lightly. As we rejoice and learn from our tremendous victory on Q2, we prepare for another day, many more attempts at privatizing, and who knows what on the federal level. Again, thanks to all for their help.

Opposition to Question 2 Across Boston

Click on the image below to see a larger version of the Question 2 vote breakdown across the city. 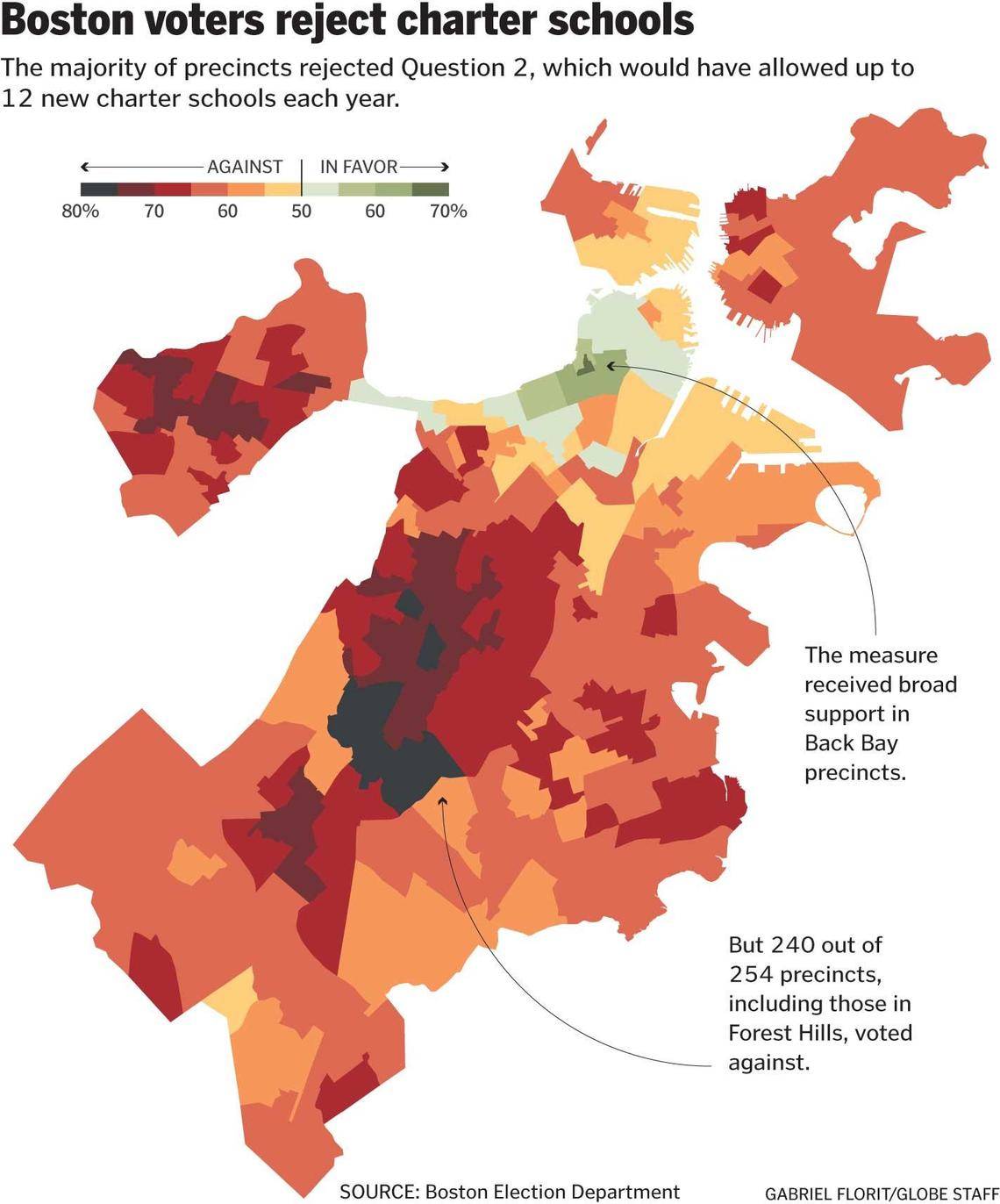 Republican President-elect Donald Trump spoke about education only in broad terms on the campaign trail, leaving plenty of uncertainty about how his administration now intends to handle policy questions ranging from standardized testing and school accountability to the treatment of transgender students.

But Trump’s stunning election is likely to mean a clear contrast with some key Obama administration policies, including a vigorous push for federally funded private school vouchers and a downsizing of the Education Department, which has arguably exercised more influence under Obama than at any other point…

A follow up piece by Valerie Strauss in the Washington Post asks, “Will Donald Trump Destroy Public Education?” Read the article.

See this report from the State House News Service:

Rejected by the voters in his bid for an expansion of charter school access, Gov. Charlie Baker said Wednesday he will explore other means of reducing the gap between the achievement levels of white students and students of color.

Speaking to reporters a day after Question 2 went down, with 37.8 percent in favor and 62.2 percent opposed, Baker mulled extensions to the school day or models similar to a Springfield partnership where schools within a public school district have authority over making their own hiring, scheduling, budgeting and curriculum decisions.

Finally, see election results for all BTU-endorsed candidates in this year’s election.