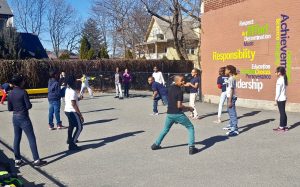 The Kenny Elementary School is located in a residential neighborhood off Adams Street in Dorchester and serves about 350 students in grades K-5. Learning is encouraged all around the school, where large framed posters from #BlackHistoryMonth help students learn about and make personal connections to notable African Americans and steps are painted with multiplication and division facts!

Fourth graders were in specialist classes when I began my visit. In music they were using hands and feet to keep time with Jerry Chu, who leads the Kenny School Marching Band and was preparing them for an upcoming performance. It was a beautiful day and PE teacher Franklin Wright had his students playing outside, reminding them to take deep breaths with hands on head to open up their lungs before organizing a game of “Dinosaur Park” – a kind of tag with students taking turns chasing or freezing their classmates.

In kindergarten classes, children were working at a variety of centers: painting, blocks, water play, etc. Paraprofessional Jemma Joseph was teaching a small group of K0-K1 students about patterns and Crystal Fahey was helping her K2 students set up a “laundry” in the housekeeping corner. First graders were all working on animal studies – in Nanna Waldrop’s class putting finishing touches on their drawings.

In Nancy Kelly’s class, students were working with partners on comparing fractions. She told me later that she attended the Kenny herself and loves how the school utilizes the resources of the community – the Adams Street branch of the Boston Public Library is around the corner, Hemenway Park is nearby, and the Pierce House – a seventeenth century home lived in by ten generations of the same family – is located directly across the street.

What connections do you make with your school’s neighborhood resources?